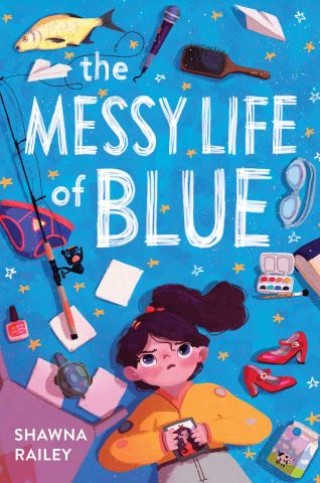 The Messy Life of Blue

Eleven-year-old "Blue" Warren is cursed with three bothersome brothers, a too-busy father, a recently deceased mother, and she's annoyed. With humor, hijinks, and heart, this debut novel is a touching tale of grief and the healing power of family.

Eleven-year-old Beulah "Blue" Warren spends every waking moment surrounded by boys: her three brothers, her father, her best friend, even the family dog, but that's never stopped her from being her usual rambunctious self. Grappling with the loss of her mother, Blue is determined to do what she wants without fear of consequences. When she is sent to the principal's office, she gets out of it like a pro. When the witchy neighbor next door trashes her yard, Blue doesn't just get even, she gets ahead. No clean underwear because she hasn't done the laundry? No worries. That's what her little brother's Superman underwear is for, isn't it? But everything changes on the day she explores the attic and finds her mother's death certificate. Blue will need to muster all the strength she has to deal with the truth, find forgiveness, trust in her father, and grieve for her mother once and for all.

Shawna Railey: Shawna Railey taught herself to read at age three, and started writing stories when she was only four years old. Born and raised in Southern California, it was hard to compete with the beach in her backyard . . . but that's exactly what books did.

Now that she's lived in Colorado with her daughter for over a decade, she has a new love in the Rocky Mountains. If she isn't reading or writing, you can find her golfing, hiking, camping, playing poker, enjoying a movie, or putting together her extensive Harry Potter Lego collection. A Girl Named Blue is her first novel.