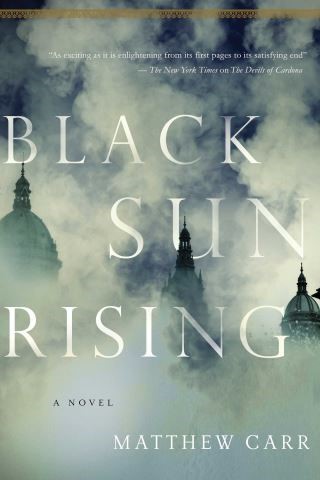 A riveting thriller combining real historical events and characters with a sinister detective story of eugenics, racism, and nationalist paranoia.

When the scientist and explorer Randolph Foulkes is blown up in a random terrorist bomb attack, private detective Harry Lawton is hired by the man’s widow to identify the beneficiary of a large payment Foulkes had made shortly before his death. Lawton’s arrival in the Catalan capital coincides with a series of unusual killings that appear to have been carried out by a blood-drinking animal in the Ramblas district and adds another element of instability to a city already teetering on the brink of insurrection. Lawton soon meets and teams up with Esperanza Claramunt, a young anarchist whose lover was one of the victims of the “beast of the Ramblas,” and the Catalan crime reporter Bernat Mata, who has begun investigating these crimes.

So what begins as a straightforward investigation into presumed marital infidelity turns into something far more sinister, as Lawton probes Foulkes’ connections to the mysterious Explorers Club, the Barcelona political police, and an eccentric Austrian hypnotist. Adrift in a city gripped by rebellion and lawlessness, Lawton enters a labyrinth of murder, corruption, political conflict, and crazed racial pseudo-science where no one’s survival is guaranteed.

Mathew Carr: Matthew Carr is a novelist, journalist, blogger, and lifelong Hispanophile. Matt has written for various publications including the New York Times, the Observer, and the Guardian. His nonfiction is published by The New Press: Fortress Europe; Soldiers, Civilians, and the American Way of War; and The Savage Frontier. This is Matt’s second novel, following the acclaimed The Devils of Cardona (Riverhead), which was a New York Times Book Review Editors’ Choice. He blogs regularly at: www.infernalmachine.co.uk.