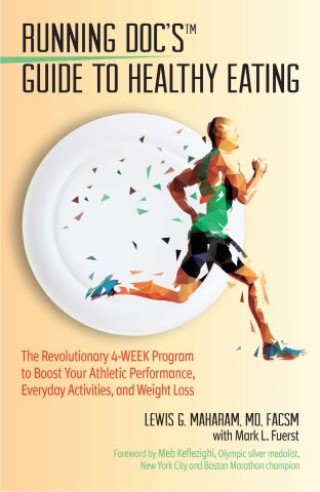 
In Running Doc’s Guide to Healthy Eating, readers will discover Dr. Lewis G. Maharam’s unique Fueling Plates Program. Developed in 2012, it has helped countless sofa spuds who really just want to get off the couch and lose weight, marathoners competing for a place at the Olympic trials, and everyone in between, including recreational athletes who play tennis, soccer, basketball and other running sports. The Fueling Plates Program is designed primarily to boost the performance of athletes, but can also boost the health of the average person, athletic or not.

Every day at Maharam’s busy New York City practice, in addition to treating sports injuries, he offers his patients nutritional advice. They ask him: “When should I eat before the marathon?” “Do I really need to drink eight glasses of water a day?” “What about sports drinks?” “Should I use energy gels?” “Gingko?” “Glucosamine?” “Raspberry ketones?” The questions come because the bulk of the sports-nutrition books on the market today make fueling your body sound like a scientific experiment. The Running Doc’s Guide to Healthy Eatingexplains why it’s time to ditch the difficult-to-use food pyramid put out by the USDA in favor of a hands-on experience of your actual plate – what Maharam calls Fueling Plates. It shows, step by step, how readers can apply the program to feel and perform better and have more energy. Those who are already exercising will get faster by eating to fuel their body more efficiently. Even everyday activities become easier with the Fueling Plates Program. Readers who are willing to take advantage of everything revealed in the book, from what to eat to reduce muscle soreness after exercising to how much to drink to be hydrated properly to an individualized nutrition program, will transform their lives.

Lewis G. Maharam: Lewis Maharam, MD, FACSM, is one of the world’s most extensively credentialed and well-known running-health experts. He runs a private practice in New York City, is the medical director of the Leukemia & Lymphoma Society’s Team in Training Program, and currently serves as the Chairman for the Board of Governors of the International Marathon Medical Directors Association. He was the founding medical director of the Rock ’n’ Roll Marathon and Half-Marathon series and past medical director of the New York Road Runners Club and the New York City Marathon. He has written for Runner’s World and Competitor magazines and authored three books: Maharam’s Curve: The Exercise High—How to Get it, How to Keep It (W.W. Norton & Co., 1992), which was published in paperback as The Exercise High (Fawcett Columbine/Ballantine Books, 1994); Backs in Motion (Henry Holt & Co., 1996), which was published in paperback as A Healthy Back (Owl Books, 1998); and Running Doc’s Guide to Healthy Running (VeloPress, 2011).Mark L. Fuerst is an award-winning health and medical writer and the co-author of eleven books, including The Harvard Medical School Guide to Tai Chi (Shambala, 2013), A Baby At Last! (Simon & Schuster, July 2010), three editions of The Couple's Guide to Fertility(Doubleday/Broadway). Similar to the bestselling Sociopath Next Door comes a unique look at the psychopaths among us and how our society--from kindergarten to corporations--encourages and rewards psychotic behavior, and what average citizens can do to survive and thrive when we must live with, learn from, or be lead by sociopaths.Olympic silver medalist and New York City and Boston Marathon champion